All of the following is RP stuff for

luceti, so just skip ahead unless you're really interested. o/

I tried to come up with an actual topic to use this icon with, as opposed to just spamming you guys.

But then I remembered this icon is a thing of beauty and I shouldn't feel ashamed to use it so. NIPPLE LIIIIIIIIGHTS.

Sorry about that. I'm still around, honest. Most of the people I knew just migrated over to Plurk so I caved and ran over there too. I honestly probably won't use this journal a whole lot anymore... but we'll see! I really should get back in the habit of using this thing again.

...or not, as my paid account is expiring and I have no money to renew. Whoops. I'll explain that bit sometime later I guess - a lot has happened since I last posted here, orz.

But as a warning! Expect some spam from me on various things over the next few days. LJ informs me that when my account expires, it will choose what userpics I'm left with based off of the ones I've used most recently in my entries over the past two months. As... I haven't used my personal journal for longer than that, this means I now need to spam with at least fourteen of my favorite icons in hopes that I'll keep them instead of my really old TMNT icons way back when. >>

I could always delete a bunch if I get stuck with them, but I'd rather not. If I get money again someday, I'll probably pay up again, so that'd be a waste of icons. Sob. I wish LJ let you keep your loyalty pics when paid time runs out. I have fifteen of those.

- 99% certain I'm moving out now, by the end of July. At first I was downright depressed by the idea, but the more I think about it, the happier I am about it.
- I really, really should start going back to work sometime. If I want to follow my awesome plan of making money again, etc, so I can have some when I leave that doesn't get eaten up by bills. But...
- I'm finding that I'm in a much better place not working, mentally and emotionally. I'm not so stressed, and my moods have stabilized a lot. So going back to work just makes me lineface. =/
- My sleep schedule has been screwed up fr the past week thanks to those few days I did go to work, actually. I've been taking short naps trying to fix it, and I seem to finally have it going where I can go to bed at midnight and wake up at 6 AM. That's normal-ish, at least - not for me, but for regular human beings, etc.
- As a result of the above, my productivity levels are shot. Slow as I am about doing things, I should really start cleaning/packing now so I can be moved out by the end of next month.
- Gotta work on RP too. Just got the one character now, so once I get things straightened out that should be easier.
- ...will probably have to slowatus/hiatus for the entire month of July though. 8|a
- Last but not least: New One Piece chapter. EPIC. Brook, that upgrade is so fitting for you, and at the same time I'm just glad you got one. You were always short on cool DF powers, in comparison to everyone else. /SPARKLES

And that about sums everything up, I think. Thusly, it is Youtube Friday, so have a cool Durarara!! amv.

This last week or so, I've been doing a lot of thinking - trying to decide what I want to do with my life. The more I think about it, the more I feel really good about deciding to quit my job. I haven't yet, mind, but just that it's become so final in my head... it's nice. I've also really enjoyed the past two weeks I haven't been at work. Well, the last one, anyways. I was so stressed and moody for the first week, but after I settled a bit? It was great. I got the sleep I needed, I wasn't so stressed... if my RP drive weren't about dead in the water right now, I probably could've gotten a lot of tagging done.

Granted, some of this comes from the fact that I can do whatever I want in my own place. If I move back in with my mom (which is probably what's going to happen), I'm probably going to lose a lot of that freedom. Even so... I still have a good feeling here. And I can always move back out again, once I 'm back on my feet and have a new job.

/tries this thinking positive thing. IDK. All I can really say I know for sure right not that not working at Wal-Mart anymore will probably be really good for me. So no matter what else happens, I'm convinced to go with that now.

Dani summed it up about perfect. /loves this series so freaking much

...this is a long shot, I figure, but does anyone know any good work from home jobs that aren't scams? And by good, I mean I will take low supplementary even.

I'm thinking I need a job change, whether I lose the one I have now or not. There's not exactly a lot of people hiring in a small town, though, so I'm trying to think of ways to make some extra money in case I quit/am fired.

I'd sell some things, but I'm pretty sure all I have that'd be worth anything is my Deadpool comics... if I can get half of what I paid for them, anyways.

Talking with Dani inspired me to catch up on my Deadpool. And I found something beautiful. 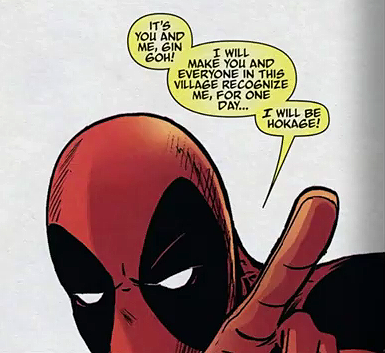 Oh, Deadpool, how I love you and your pop culture references.

Today's Youtube Friday is a two-for-one deal, mostly as they just go hand in hand. It's two trailer/amv things!  Apologies if you can't understand it - the amv maker is French, so that's what they put their subtitles in.

POINT IS, they still look cool. And also that if you watch them, you pretty much get the summarization of all the cool parts in the entire Pein arc in Naruto without having to sit through the crappy bits.

The first one features Pein's invasion of Konoha, and the second Pein's fight with Kyuubi!Naruto. Not gonna lie, I think I like the first one better. Better music, and I think it's just more dynamic.

But seriously. Poor Neji. See, Kishimoto. This is what happens when you neglect your side characters. They have to go on homicidal rampages just to get your attention. 8|

I truly hate morning shifts. Maybe if I just. Drink some vodka I can sleep like a rock for four hours and not worry about all the sleep I'll miss while I'm working. Or maybe I should not sleep. The last time I had a morning shift, the alarm didn't go off and I was late to work.

Moral of the story is, Wal-Mart stinks and you should all help me punt it. I'm sure if I kick it hard enough, a real paycheck will fall out of it. @__@

Anyways, everyone I know, including me, could use some cheering up right now, I think. So here is a video I found that I thought was cute. <3

So Dani found this really cool RP meme where you take photographs and make a collage of things you think represent your character - here's some examples, if you're interested.. It's actually pretty cool and fun, and if you're anyone but me, easy too.

And there's still stuff I want to change about it. /resiiiiists